In this article, we honour Small Works Manager, Gavin Hughes, for his contribution to Woodward Group and get an insider look at the last two decades of his career.

Gavin, Gav for short, began as a staff member who worked on the tools until he eventually became a key manager in charge of cultivating business relationships. As Small Works Manager, Gav thrives on the daily excitement and variety that his job brings. He appreciates working in various settings, completing diverse job orders, and meeting new people. 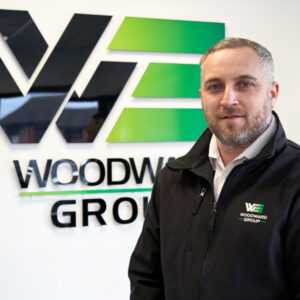 In his 20 years of service, Gav has achieved a string of accomplishments, particularly his work in the Foreign Office and Leicester City’s training ground. He considers these experiences the highlights of his career, alongside playing a significant role in managing and nurturing relationships with loyal customers of Woodward Group.

A Sense of Family

Gav shared how he was never once tempted to accept other work opportunities despite multiple external offers, attributing his loyalty to the familial culture he has experienced through the years at Woodward Group. From early days on the tools to growing into handling a managerial role, Woodward Group has been a massive part of Gav’s life with his deep roots and history with the company.

Gav looks forward to reaching more milestones with the business and further driving Woodward Group’s growth, through the highs and lows, alongside other employees. His vision for this next season is to consistently serve new and existing customers whilst helping the company lead in the M&E industry. In addition to strengthening relationships with the company’s new clients, Gav intends to see his vision through with a focus on building the Small Works and Compliance division.

We use cookies on our website to give you the most relevant experience by remembering your preferences and repeat visits. By clicking “Accept”, you consent to the use of ALL the cookies. However you may visit Cookie Settings to provide a controlled consent.
Cookie settingsACCEPT
Manage consent